The Midland Cultural Centre is proud to announce Straight Talk’s next program, Renewable Energy – The Hidden Crisis. Watch to learn what a 100% renewable future will look like, which technologies will play a crucial role in our energy future, what challenges will we face in this transition, and how we can make sure our new system is just and equitable. 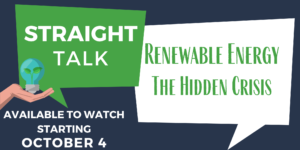 COVID-19 and the Environment: Behaviour, Policy and Implications for Sustainability
September 29, 2020

This presentation focuses on the effects the pandemic has had on human behaviour, such as reduced travel, related fossil fuel use and emissions due to remote work arrangements vs. the potential for declines in the use of low-carbon transportation options, particularly public transit, and moves in the direction of lower density urban forms. Professor Winfield will also discuss the changes in environmental law, regulations and policies that have been made in the context of the pandemic, and the extent to which they further embed unsustainable activities and behaviours or move a post-pandemic recovery in the direction of sustainability. 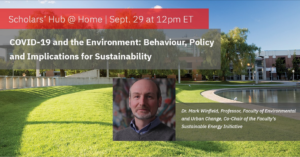 Carbon Province, Hydro Province: The Challenge of Canadian Energy and Climate Federalism
May 12, 2020

Canada is unable to meet its climate-change targets in large part because emission reductions in provinces such as Ontario and Quebec are being overwhelmed by emission increases in others such as Alberta and Saskatchewan. How can we get the whole country moving on the same track of declining emissions?

The book provides comparative analysis of all attempts to date to put in place co-ordinated federal-provincial energy and climate programs, from Pierre Trudeau’s National Energy Program to Justin Trudeau’s Pan-Canadian Framework. Based on findings from that analysis, the book provides specific, politically viable recommendations for how we can generate more effective national climate policy without an irremediable fracturing of Confederation along the line of the West-East divide.

COVID-19 notwithstanding, such analysis is badly needed today. The October 21 2019 federal election showed a majority of voters are demanding more aggressive action to reduce emissions. But the premiers of Alberta and Saskatchewan, pointing to their very real economic distress and to the equally real problem of western alienation, are demanding policy actions which will increase their emissions. Must we choose between national unity and climate action? Carbon Province, Hydro Province outlines a path through these clashing imperatives.

Join us for a webinar presentation with author Douglas Macdonald followed by questions and discussion, including the issue of how the current pandemic is reshaping Canadian climate-change politics. The event will be hosted by SEI co-chair, Mark Winfield.

Speakers include: Douglas Macdonald has written extensively on Canadian climate-change policy. The Canadian Political Science Association awarded his 2007 book Business and Environmental Politics in Canada the Donald Smiley prize for the “best book published in English or French in the field relating to the study of government and politics in 2007.” 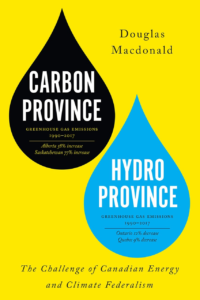 Unlocking the Potential of Energy Efficiency in Ontario
April 20, 2020

Estimates of the technologically and economically achievable potential for energy efficiency improvements in Canada are significant, offering the potential to make significant contributions to meeting Canada’s GHG emission targets. Despite their benefits, energy efficiency initiatives have struggled to achieve their full technological and economic potential to reduce to energy demand. These failures have been due to a range of market, institutional, financial, policy, regulatory, behavioural and informational barriers. In recent years, new challenges have emerged beyond these traditional and well-understood obstacles. Changes in policy direction, often flowing from changes in governments, have resulted in significant retrenchments, and in some cases wholesale dismantlings, of energy efficiency strategies in North America. The Government of Ontario’s decision to terminate its “Conservation First” strategy in March 2019 was among the most dramatic of these developments, but far from unique. York University’s Sustainable Energy Initiative recently released a study of outlining five principles for the design of effective and resilient governance of the energy efficiency components of low-carbon sustainable energy transition strategies. Join SEI Co-Chair Professor Mark Winfield for a webinar discussion of the application of these principles to the current situation in Ontario.

Re-envisioning an Energy Strategy for Manitoba: Planning for 2030 and Beyond
University of Winnipeg March 10, 2020 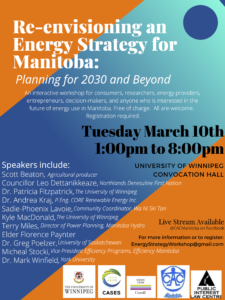 Blockchain as an Enabling Technology for Microgrids and DERS
York University February 25, 2020

Blockchain as an Enabling Technology for Microgrids and DERS 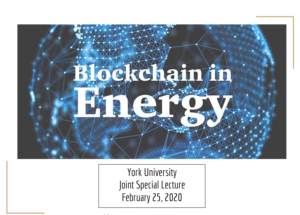 The Joint Clean Climate Transport Research Partnership (JCCTRP) is a new interdisciplinary and transdisciplinary research partnership focusing on issues related to transport and climate policy in Quebec, California, Ontario and Vermont. The ultimate goal of the JCCTRP is to identify technical, economic and political factors shaping the potential for environmentally effective, economically efficient, and politically viable low-carbon transport and climate mitigation policy, and understand their implications for emissions trading.

AN OPPORTUNITY TO INTEGRATE THE TRANSPORT SECTOR MORE FULLY INTO CLIMATE ACTION. The Joint Clean Climate Transport Research Partnership (JCCTRP) is a new interdisciplinary and transdisciplinary research partnership focusing on issues related to transport and climate policy in Quebec, California, Ontario and Vermont. The ultimate goal of the JCCTRP is to identify technical, economic and political factors shaping the potential for environmentally effective, economically efficient, and politically viable low-carbon transport and climate mitigation policy, and understand their implications for emissions trading. Reforming Environmental and Energy Reviews in Canada: A Reflection on Bills C-68 and C-69
October 10, 2019

Bill C-69, the Trudeau government's promised reform of the federal environmental assessment process and the role of the National Energy Board was adopted in June 2019 after a long and sometimes bitter legislative struggle. Amendments to the Fisheries Act were adopted at the same time.

What does the legislation really achieve? Why is the Province of Alberta challenging the legislation? Join us for a highly informative discussion with four experts who were deeply involved in the development of Bills C-68 and C-69.

The Trudeau government's long-awaited Bill C-69, reforming the federal environmental assessment processes, roles of energy regulatory agencies and the Navigation Protection Act, was tabled on February 8th. Along with the amendments to the Fisheries Act introduced on February 6th (Bill C-68), the initiative represents the most significant federal legislative proposals on the environment seen for many years.

Page of 4
Next
Tweets by EnvironmentYork

The Faculty of Environmental and Urban Change's Sustainable Energy Initiative (SEI) has been established to build and strengthen the teaching, research and partnerships needed to create new green energy economies in Canada and around the world. Focused on energy efficiency and conservation, renewable energy sources and combined heat and power.

The SEI is Designed to: